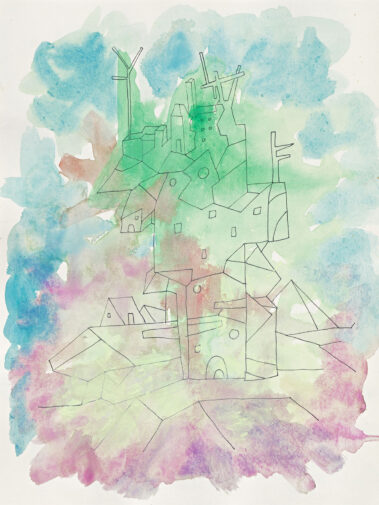 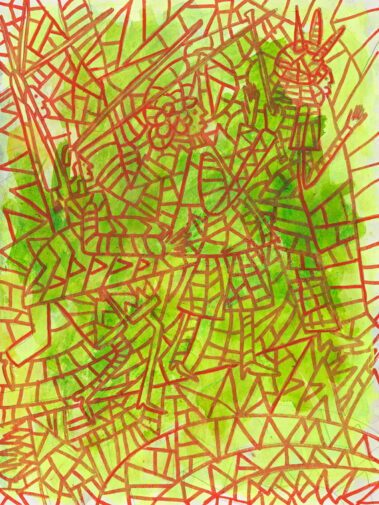 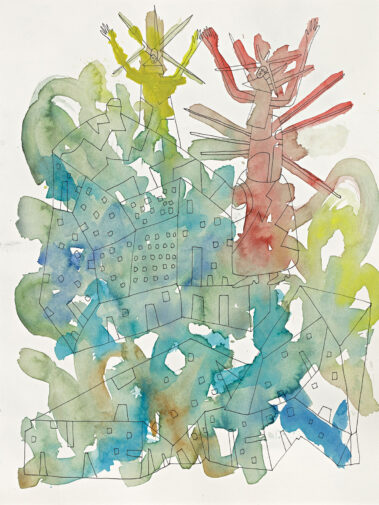 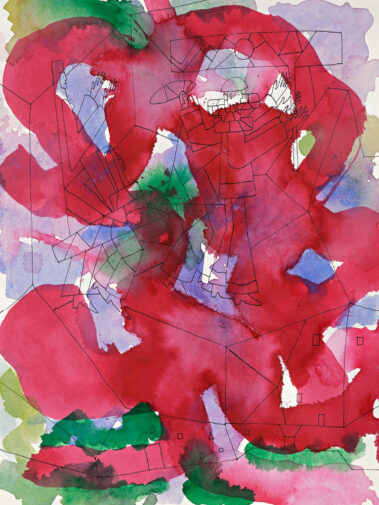 When artists travel
When artists travel, they take their special view of the world along in their baggage. The painter Sebastian Heiner has traversed the globe a number of times with trips to Israel, Jordan and the Caucasus. On a number of occasions, he was able to combine his travels with prolonged work orientated stays in cities such as Bangkok, Beijing and Shanghai. These changes of location (and consequent cultural contexts) in recent years are reflected in the development of his large-format paintings, graphics and performances. Now, for the first time, he has produced a series of texts written during his recent stay in Shanghai (2017), which were then revised and enhanced upon with the assistance of the philosopher Steve Long. During the same period, Sebastian Heiner also completed a series of impressive abstract works and conducted a painting performance, which has been recorded on video. His perspective on Shanghai as a prototypical Moloch City is complemented by the intense photographs of Michael Wruck.

When artists write
The art historian Michael Glasmeier has described the texts written by artists as „an independent medial form of art, when one concurs that art is essentially an intellectual pleasure, both for its producers and audience.”. He goes on to explain: „To understand not only contemporary art, it is more than helpful to accept the different roles assumed by artists and thereby the outstanding experimental and exploratory character of art. It is therefore about the standpoint adopted by thoughtful and reflective artists, an activity that does not always have to be expressed in painting, but for whom the text is another and different medium of expression.”. On this basis, the texts by Sebastian Heiner should not be read as if directly related to his paintings, but instead as opening up a portal to his thought processes and reflections.

Sebastian Heiner’s tracts weave between reality and fiction, between everyday experiences and dreams, between the present and utopia. In dream-like sequences such as “Food“ and „The Orange Cloud“ the artist assumes the perspective of a nameless protagonist and describes a future world / mass society in a state of continual renewal which places enormous pressure upon its subjects. In his expositions „Colour“ and „Cat“, Sebastian Heiner allows us to participate directly in his work process, sharing his thoughts and emotions, which are sometimes bound up with fears or contradictory impulses. The creative act of painting and the production of images is thereby demystified and made comprehensible to the layman. A third related set of texts focus on sensory perceptions in a foreign environment. Heiner uses poetically condensed language to describe his impressions – and makes clear that in today’s increasingly digitised world we still perceive and construct our world exclusively through our sensory organs. In toto, the texts constitute a means for the artist to acquire distance from himself, enabling him to describe sensory impressions, emotions, thoughts and dreams which provide the basis for a psychogram of the artistic subject.

When artists create figures
For the first time, Sebastian Heiner has produced a series of mainly figurative watercolours. Initially, one is struck by the contours of the figures, which are then partially painted over or broadly filled out. These pages are populated by figures moving through urban landscapes, one at a time, in pairs, or accompanied by animals, vehicles and flying objects. Heiner’s protagonists are attired in seemingly timeless robes, carrying or balancing objects on their heads, some of which appear to be antennae. In any event, the origins of the actions and poses struck by these apparently genderless beings remain both fantastic and enigmatic to the viewer. This impression is reinforced by colours and surfaces which flow into one another.

The watercolours were produced independently of the small essays so there is no automatic connection between the two. Nevertheless, it is possible to reconstruct a compositional dramaturgy that results from the non-linearity of the images and texts. Reading or flicking through these can cause both confusion and irritation, as well as pleasure and surprise.

A final thought
This book takes us on a stimulating and varied journey, allowing us to immerse ourselves in the hitherto unknown visual and textual landscapes of the artist, which, at the same time, open up an expansive cognitive and artistic space. Sebastian Heiner creates works that have a strange yet poetic effect that lingers long after seeing them. Tantalising links emerge between his and our own stories confronting us with the increasingly complex web of historical, cultural and personal conditions and relationships in which we live. In the final analysis, whether in the form of his watercolours, paintings, performances, photographs or texts, it is up to the viewer to make the final judgement on Heiner‘s own perspective.